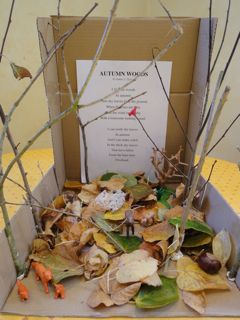 Reading poetry is a wonderful way of stimulating your child's imagination and encouraging them to practice building pictures in their minds suggested by the words of the poem. Mental imaging is a useful comprehension tool for your child to learn since it can help them to gain a deeper understanding of what they read.

Autumn poems offer lots of opportunities for visualisation and imagination - the vibrant colours of the leaves; the rustling of leaves underfoot; the silhouettes of the bare trees; the wind rushing through the branches. There are many autumn poems to choose from. Look for those which contain interesting vocabulary or metaphorical language. We chose 'Autumn Woods' by James S. Tippett, which is contained in one of our favourite books of poems for children The Puffin Book of Fantastic First Poems.

You can also find Autumn Woods and other autumn poems here.

Here is the poem we used:

I like the woods
In autumn
When dry leaves hide the ground,
When the trees are bare
And the wind sweeps by
With a lonesome rushing sound.

I can rustle the leaves
In autumn
And I can make a bed
In the thick dry leaves
That have fallen
From the bare trees
Overhead.

After reading the poem a few times we helped to bring my children's mental pictures to life by creating an autumn woods play scene that we used when reciting the poem. My boys had great fun acting out the lines from the poem in the play scene, whilst simultaneously reading the poem. It was a fun way to sneak a bit of reading and comprehension practice into playtime!

If your child is keen, you could also see if they can memorize the poem. Memorizing poetry can help exercise the mind and facilitate committing new words and phraseology to memory.

This is what we did to bring our autumn poem to life:

1. First we went to the forest near our house and found a quiet place to sit on some tree stumps. I then read the poem aloud to my children. I asked them to close their eyes and really listen hard to what I was saying. When I had finished reading the poem, I asked my boys to describe what picture they had in their mind while I was reading the poem.

2. Back at home I read them the poem again. I then explained that we were going to make a little woodland scene to help us act out the words of the poem. I put two shoe boxes outside and asked them to fill one with leaves and one with sticks. 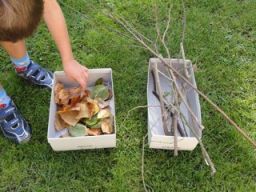 3. While my boys were collecting leaves and sticks I gathered the rest of the materials: a box (an old 6 bottle wine box was the perfect size), a copy of the poem in large type, scissors, sticky tape and any toy trees or forest animals you may have lying around (Playmobil came up trumps again). 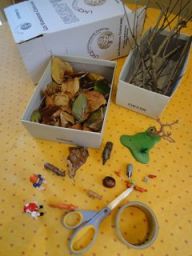 4. I then cut up the cardboard box to make the base for the play scene. I just cut along one edge of the box and then stuck the flaps together with sticky tape to make it stand up the way I wanted. Using blue-tack and sticky tape we attached sticks to the bottom and sides of the play scene. These were the bare trees. The boys then sprinkled a few leaves on the bottom of the box and added the various forest animals. 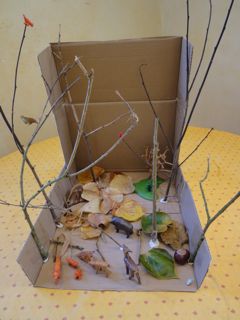 5. Now we were ready to read the poem again. I read the poem and showed the boys what actions we could do while reading it. We made a whooshing sound at "And the wind sweeps by with a lonesome rushing sound". We rustled the leaves on the bottom of the play scene at "I can rustle the leaves". And we dropped lots of new leaves onto the play scene (by far the best bit) at "In the thick dry leaves that have fallen from the bare trees overhead".

My eldest then read the poem, which was good practice for a beginner reader, whilst the youngest did the actions. Then they swapped roles. Whilst my elder son did the actions, my younger son joined in with me to read the poem, pointing to the words as we read them using a stick. By following the words as they were being read my younger child was starting to make connections between the words he was hearing and the words on the page. He already understands print conventions, but a child who didn't would also learn how words track from left to right and from line to line. 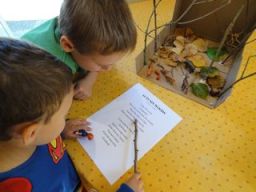 6. If your child is keen you could encourage them to repeat the poem until they have committed it to memory. We read it a couple more times and then my boys had had enough of autumn poems and were more interested in 'free-play' with the autumn play scene. Who was I to stop them?!

So go dig out one of your favorite autumn poems and get visualising!