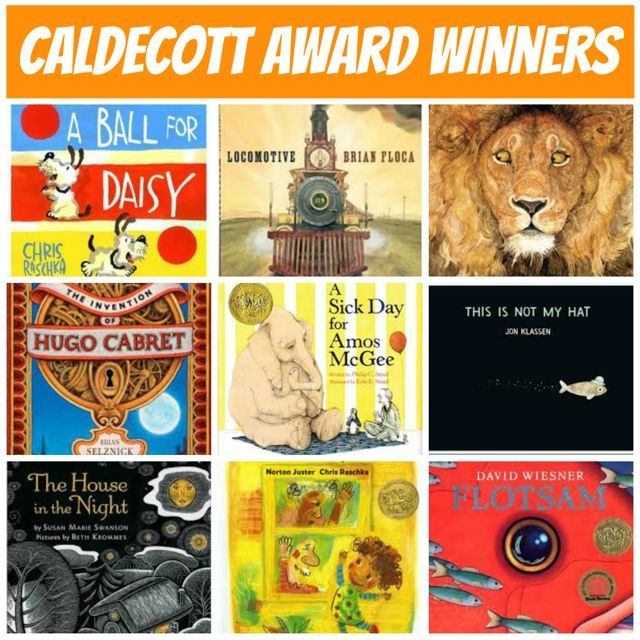 The Caldecott Award is a prestigious award which was first presented in 1938. It is awarded annually by the American Library Association to the artist of the most distinguished American picture book for children published in the United States.

The award is named in honor of the nineteenth-century English illustrator Randolph J. Caldecott and is granted specifically to the illustrator of the book, rather than the author, although the two may be, of course, one and the same. The award was created to complement the Newbery Medal, another award which acknowledges the authors of children's books, in recognition of the fact that the artists creating picture books for children were as deserving of honour as the authors of children's books.

Below you can find details of the most recent winners of the Caldecott Award.

The Adventures of Beekle: The Unimaginary Friend

illustrated and written by Dan Santat is a book about friendship and courage. An imaginary friend, Beekle, is born on an island far away and waits to be chosen by a real child. Eventually, fed up with waiting, he heads off on a courageous and emotional journey to the city to find his own human.

by Brian Floca is the perfect book for any train-lover, painting a picture of life on America's early railroads. It is 1869 and a train approaches the platform. The book describes the mechanics of the locomotive, the responsibilities of the crew members, the passing landscapes and the thrill of the passengers experiencing the sights and sounds of this new mode of travel.

This Is Not My Hat

. A little fish steals a bowler hat from a much bigger fish and then proceeds to tell everyone about it. Unbeknown to him, the owner of the hat is in hot pursuit and the two fish disappear behind a tangle of seaweed. The big fish emerges with his hat and the reader is left to surmise the fate of the little fish.

A Ball for Daisy

illustrated and written by Chris Raschka is a wordless book which tells the tale of a dog called Daisy and her very special ball. First we see Daisy's joy when playing with the ball, but then the ball pops and her joy turns to sorrow. The bold, colourful illustrations display the changing emotions wonderfully. Fortunately it all comes out well in the end when Daisy gets a new ball to play with.

A Sick Day for Amos McGee

illustrated by Erin E. Stead and written by Philip C. Stead tells the story of an elderly man who works at the zoo, spending a little bit of quality time each day with his special friends - the elephant, tortoise, penguin, rhinoceros and owl. One day Amos is too sick to go to the zoo and so his friends decide to visit him at his home. This is a lovely gentle story with elegant drawings in soft colours.

The Lion & the Mouse

illustrated and written by Jerry Pinkney is an adaption of an Aesop fable and contains vivid artwork of the African Serengeti with expressively-drawn, but still realistic, animals. A ferocious lion spares the life of an adventurous mouse. The mouse finds a way of returning the favor by freeing him from a poacher's trap. The few words in the book tend to be onomatopoetic.

Many of our family favorites have been winners of this award and it is hard to choose our top five. However, after much deliberation here they are:

by Virginia Lee Burton was the sixth winner of the Caldecott Award, winning it in 1943. It describes how a house in the countryside eventually finds itself in the middle of a busy city after a new road is built followed by more houses, apartment blocks, tramways, railways and subways. The thing I love about this book is that as well as being a touching story, it is so rich with things to discuss ... transport before cars, the seasons, the waxing and waning of the moon, urban vs country living. My children love it too and have committed most of it to memory. I was astonished when I realised I could stop virtually anywhere in the book and my three year old would finish the sentence for me.

Sylvester and the Magic Pebble

by William Steig was the Caldecott Award winner in 1970. One rainy day Sylvester finds a magic pebble and realises that anything he wishes for will come true. However, too late he realises that he must be holding the pebble in order for the wish to be granted. On encountering a lion, Sylvester panics and turns himself into a rock. However, now that he is a rock he cannot hold the pebble and so cannot turn himself back again. How will he get out of this?

Why Mosquitoes Buzz in People's Ears

by Verna Aardema and illustrated by Leo & Diane Dillon won the Caldecott Award in 1976. This African folktale explains how a mosquito who tells a lie to an iguana sets off a chain of events which eventually results in the sun not rising. A good tale to warn young readers of the dangers of lying, with brightly coloured illustrations to help capture their attention.

by Peggy Rathmann won the Caldecott Award in 1996 and tells the amusing story of Officer Buckle and his amazing acrobatic police dog, Gloria. Officer Buckle was responsible for giving safety talks at Napville Elementary School, but nobody would ever listen. Then one day everything changed when Gloria, the police dog, accompanied him. Suddenly everyone was paying attention and he was inundated with requests from schools who wanted to hear his saftey speech. He didn't quite know what had happened until a television news team videotaped one of his talks and Officer Buckle realised what had been going on behind his back.

The Man Who Walked Between the Towers

by Mordicai Gerstein was the 2004 winner of the Caldecott Award. It tells the true uplifting story of Philippe Petit, a French trapeze artist, who surreptitiously constructed a tightrope between the two towers of the World Trade Center in 1974. He then spent an hour performing high-wire tricks up in the sky, walking, running and dancing between the towers to the amazement of people below, and all with no safety net of course!

2015
The Adventures of Beekle: The Unimaginary Friend

illustrated and written by Dan Santat

illustrated and written by Jon Klassen

illustrated and written by Chris Raschka

illustrated and written by Jerry Pinkney

2008
The Invention of Hugo Cabret

2004
The Man Who Walked Between the Towers

2000
Joseph Had a Little Overcoat

1985
Saint George and the Dragon

1984
The Glorious Flight: Across the Channel with Louis Bleriot

translated and illustrated by Marcia Brown; original text in French by Blaise Cendrars

1979
The Girl Who Loved Wild Horses

1976
Why Mosquitoes Buzz in People's Ears

retold and illustrated by Nonny Hogrogian

1970
Sylvester and the Magic Pebble

1969
The Fool of the World and the Flying Ship

1964
Where the Wild Things Are

retold and illustrated by Marcia Brown

1961
Baboushka and the Three Kings
illustrated by Nicolas Sidjakov; text by Ruth Robbins

1959
Chanticleer and the Fox

1955
Cinderella, or the Little Glass Slipper

1941
They Were Strong and Good