I am always trying to think of new, fun ways to encourage my children to get writing. Writing helps to develop literacy skills, such as vocabulary, grammar and spelling, as well as improving thinking and communication skills. 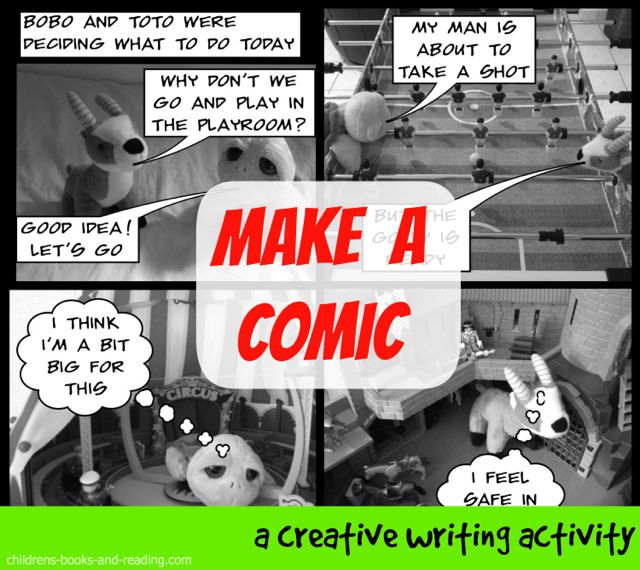 Using technology in a creative writing activity is one way to engage your child. Anything to do with an iPad never fails to capture my boys' attention and there are some excellent apps available which your child can use to create their own e-books, comic strips or movies.

However, I do worry that all the fun, creative tools that these apps provide can distract from the process of writing. The sheer versatility and potential of these apps can be a bit overwhelming for a 7-year-old (and, frankly, also for a 40-something-year-old!). There can be a tendency for your child to spend all their time tweaking the pictures or drawings, leaving little time for writing interesting prose to accompany the pictures.

So I decided to use one of these apps, the very good comic editor ComicBook!, in a structured creative writing activity which would allow my son to concentrate first on writing the words to accompany a comic strip, and afterwards on tweaking the pictures.

With the ComicBook! app you use photos taken on your iPad, or available in your photo library, to create a comic strip and then add speech bubbles to the photos as well as comic graphics (called 'Stickers' in the app) to tell your story.

The Steps to this Creative Writing Activity

To provide some structure to the activity, and to get my son used to the idea of creating a comic strip, I decided for our first comic to take the photos myself and then create empty bubbles ready to be filled in by my son. In this way, he could initially focus on the words which the characters were saying or thinking, rather than worrying too much about the pictures to go with the words.

I chose to base the story on what my son's favourite cuddly toys get up to when he is at school, something which I have been telling him tales about recently. Part of the reason for choosing this theme was that it would be relatively simple for my son to write follow-on stories along similar lines in future comic strips.

The app is quite straightforward to use and has instructions in the Utilities Menu. First I took 6 photos with my iPad. Then I selected a 6 picture comic layout, loaded one photo into each window, added speech bubbles to the photos (putting a number from 1 to 10 in each) and finally added a sentence at the start and the graphic "The End" at the end.

Once I was done, I selected 'Save Image' under the Utilities Menu, and saved an image of the comic to my photo library, from where I was able to email it to my computer and print it off.

I did this step in advance so it was ready for when my son came home from school. You don't have to print off the comic, but I thought it might be easier for my son to concentrate on his writing if the comic was initially on paper rather than on the screen.

Of course, you could also do this without the ComicBook! app by printing out your photos, sticking them onto a blank sheet of paper and then sticking blank labels onto the photos where you want the speech bubbles to be. 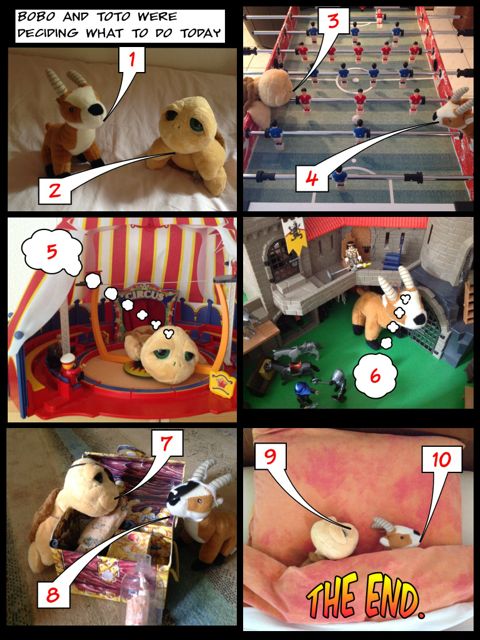 When my son came home from school I showed him the comic and he had a good giggle at the pictures. Then I gave him a blank piece of paper with 1 to 10 written down one side and asked him to write the words which he thought his toys were saying or thinking in each picture. I encouraged him to write this first draft without worrying too much about spelling. I just wanted the ideas to flow.

His toys weren't particularly talkative this time, with a number of 'OK's featuring. Next time we do this creative writing activity I will persuade my son that his toys really are a talkative bunch and they are likely to say much more than just 'OK'. 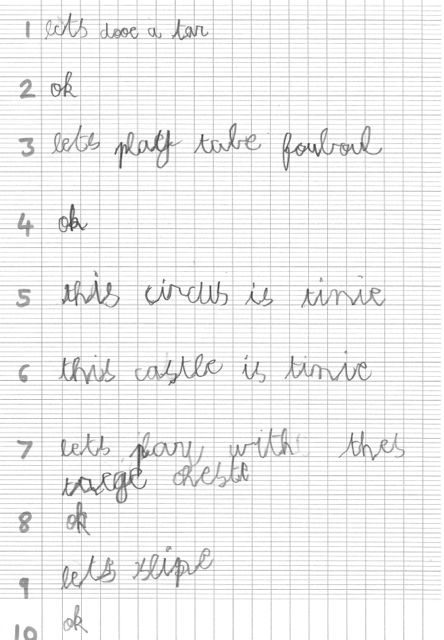 Next, we opened up the iPad and my son typed his words into the comic editor, correcting the spelling as he went. To help work out the correct spellings of some words we used his Vowel Sound Directory. Once your child has added the words, you could encourage them to add any additional stickers to the photos (POW!s and ZAP!s for example) that they wish.

Here is the final version: 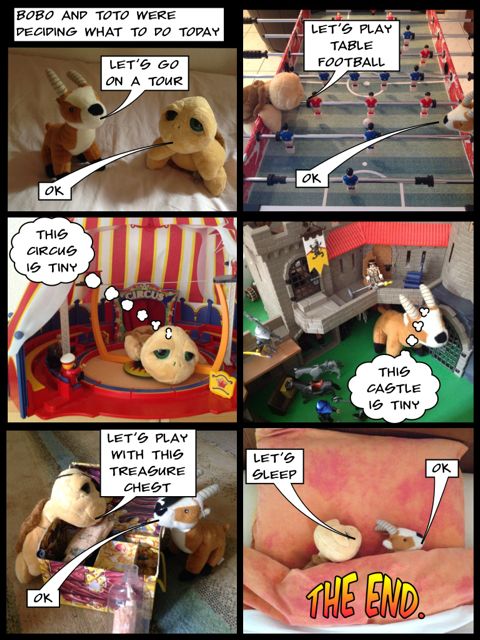 One of the good things about doing this creative writing activity on the iPad is that it was easy for my other son to also have a go, since I saved a blank copy of the comic. In his version, the toys are a little more talkative!

Once your child is familiar with how to make a comic, the next step is obviously to let them make up their own stories and take photos of their own. Lego and Playmobil can be great props to use for more involved stories. Take photos of scenes and load them into the ComicBook! app then add the dialogue.

You will probably still find that younger children need help planning out the story, however, and it might be worth tackling these projects in two stages. First, spend time planning the story and taking the pictures and then, as a second stage, encourage your child to concentrate on giving interesting and imaginative words to their characters.