Fishing for Letters and Words

While cleaning out a cupboard recently I came across our magnetic fishing rods which had got packed away with the summer toys. This inspired me to play this simple fishing game with my two sons.

It was a perfect way to simultaneously practise letters with my 3 year old and words with my 5 year old. Both boys really enjoyed themselves and it was quick and easy to set up. 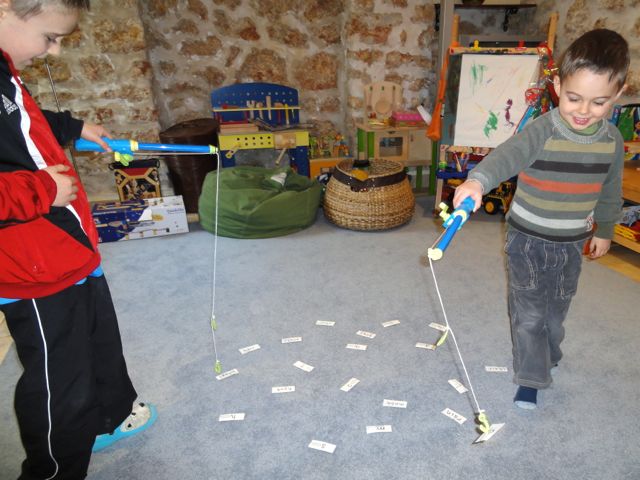 Gather your materials. You will need a magnetic fishing rod for each child. If you don't have ready-made ones you can make your own with a stick, a piece of string attached to the stick and a magnet attached to the end of the string. You will also need card or paper for writing the letters and words on, a pen, scissors and paper clips. 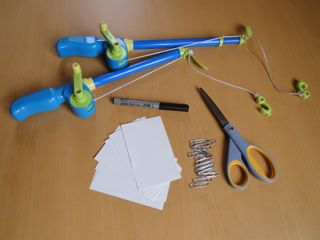 Cut the card into small pieces, each big enough to write a word on. I made 40 cards in total. Write a word or letter on each card. I wrote letters on 20 cards, for my younger son to practice. For letters which could be ambiguous depending on which way you look at them (such as p, b and d), I put a line under the letter to make it clear which way they should be viewed.

On the other 20 cards I wrote words, choosing words which contained phonic sounds my son is currently learning so that he could practice these. If you want to stretch your child, try to choose groups of words which all start with the same letter or sound. I did this to a certain extent, but probably not enough since I noticed that my son would often find the word based solely on the first letter or sound in the word. A very sensible strategy of his, but not what I had intended!

Rather than put out all 40 cards at once, which I thought would be a bit overwhelming for my children, I chose to play the game in two stages, with 10 letter cards and 10 word cards in each stage. Having chosen the 20 cards to play with, I attached a paper clip to each card. 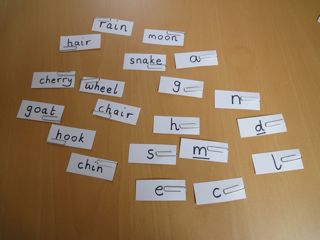 Lay the cards out randomly on the floor and then ask each child in turn to 'catch' the word or letter which you ask them for and bring it to you Continue until all of the cards have been collected. If your child makes a mistake just return the card to the floor and ask them to try again. Once you have finished with the first 20 cards, you can play again with the second set of 20 cards. 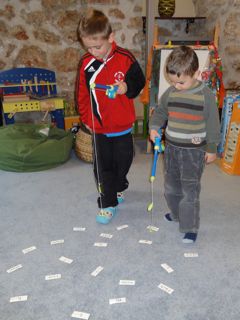 My children loved it so much that when we had finished they asked to play it again as part of the Read and Post game, which we had played a few weeks ago. So I transferred the paper clips to the other word cards I had already created as part of that game and laid out those cards on the floor. Big brother fished for the words I requested, and then little brother posted the word card in the correct 'letter box' showing a picture of the word. Such team work!

I hope you children have fun fishing for letters and words!


You are here: Home › Alphabet Games › Fishing for Letters and Words