How the Grinch Stole Christmas!
Making A Kid's Comic Strip 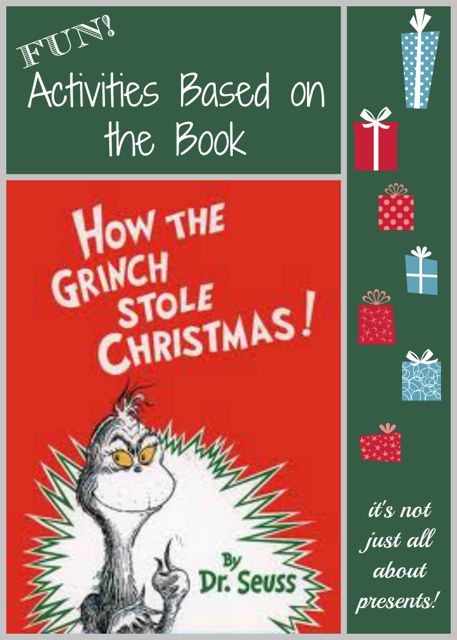 by Dr. Seuss. It is an amusing story, told in classic Seuss' rhyme, about the Grinch who, hating Who-ville's Christmas celebration, devises a plan to stop Christmas from coming this year. On Christmas Eve he dresses up as Santa Claus and steals all the presents, decorations and food from every house in the town.

Imagine his amazement when Christmas comes anyway and he hears every Who in Who-ville singing "without any presents at all!". It finally dawns on him what the true meaning of Christmas is about: "Maybe Christmas," he thought, "doesn't come from at store. Maybe Christmas...perhaps...means a little bit more!"

At a time when all the talk in our house is usually about presents, presents, presents, I appreciate an opportunity to make the point to my children that Christmas is about more than just presents. How The Grinch Stole Christmas provides a humorous way to get your child to think about the real meaning of the non-religious aspects of the Christmas holiday. Try asking them some of the following thought-provoking questions:

If your child is anything like mine, however, they can be prone to mono-syllabic answers when asked questions such as these. So I decided to try some activities based around How The Grinch Stole Christmas to help get my son thinking about the story in a little more depth. While doing these activities I found lots of opportunities to ask my thought-provoking questions, and I even managed to elicit answers of more than one word! 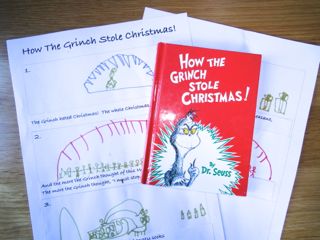 A useful way of helping your child to really understand a story is to ask them to sequence the events in the story. To do this they need to summarise and synthesise what they have read, which is a key reading strategy. Being able to do this will help your child to fully grasp the meaning of the story and the author's purpose in writing it. If your child practices ordering the events in a story this will also help them to retell the story to others more easily, ensuring they don't just focus on the parts of the story they prefer or they heard most recently (ie the end). 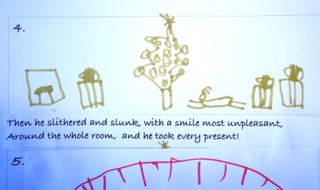 In this activity I asked my child to create a kid's comic strip with six frames which retells the story of How The Grinch Stole Christmas. There are many ways to do this, depending on your child's age and enthusiasm. Normally a comic strip contains a lot of dialogue, however I tried something different. I chose to select sentences from the book myself which summarised the story. I then printed these out and cut them up into separate sentences, muddling up the order. I asked my child to read the sentences and then stick them onto a comic strip template in the right order. Above each sentence, my son drew a picture representing the sentence. As well as enabling my son to sequence the events in the story, this activity also provided him with valuable reading practice. The kid's comic strip template and sentences I used can be downloaded here.

Other ways to try this activity are:

Watch the Movie of How The Grinch Stole Christmas

Following the book, which was published in 1957, two films have been made of How The Grinch Stole Christmas. The first film was made in 1966 and is a 26 minute short animated film featuring Boris Karloff.

Most of the narration is faithful to the book, the most notable exception being the addition of a description of just how the Whos make so much noise on Christmas morning. If you enjoy the book this film is well worth a look.

The second film was a comedy released in 2000 and starring Jim Carrey.

Many details have been added to the story in this film to bring it up to feature-length.

You could also try these other activities with your children:

Have fun remembering what Christmas is really all about with How The Grinch Stole Christmas.


You are here: Home › Teaching With Picture Books › How The Grinch Stole Christmas