The look and say teaching method, also known as the whole word method, was invented in the 1830s and soon became a popular method for teaching reading.

By the 1930s and 1940s there was a very strong focus on teaching children to read by this method. In the 1950s, however, it was fiercely criticised in favour of phonics-based teaching. The debate still continues today.

The look and say method teaches children to read words as whole units, rather than breaking the word down into individual letters or groups of letters. Children are repeatedly told the word name while being shown the printed word, perhaps accompanied by a picture or within a meaningful context.

Eventually children learn to ‘sight read’ the word, recognising it through pattern recognition without any conscious attempt to break the word down into its parts. Over time children build up a larger and larger vocabulary of whole words which they can recognise.

Try playing one of these commercially available early reading games designed to practice sight-word recognition and rhyming and help to introduce new vocabulary. There are also some fun word-based literacy games using the look and say method you can play with your child to help them start to recognise whole words. 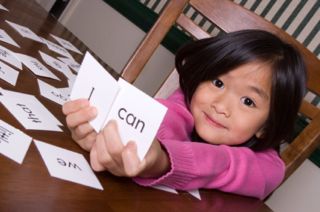 
You are here: Home › Teaching How to Read › Look and Say