Jan 25, 2011: A number of discussions have appeared in the press recently around parenting styles and the ever present pressure to be the perfect parent. 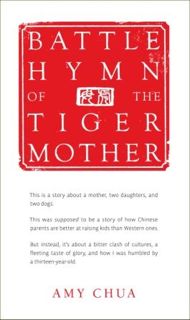 "Come on, read, you lazy boy! No more mistakes."

This is not something you would hear me saying to my son but according to Amy Chua, who has just published a controversial book entitled "Battle Hymn of the Tiger Mother", it could well be what you would find many Chinese parents saying to their children. Chua, a Chinese American academic at Yale, advocates a "tough mothering" style of parenting which she believes explains why Chinese parents raise such stereotypically successful kids.

Her children were not allowed to have playdates, watch TV, play computer games or get any grade less than an A. They also had to practice their instruments for two or three hours a day.

To get good at anything, children have to work and since they never want to work on their own, it is crucial to override their preferences, according to Chua. Chinese mothers believe their children can excel and it is their job to drill their children until they do. Once the child does start to excel at an activity he gets praise, admiration and satisfaction which builds confidence and the activity starts to be fun.

The book has provoked a lot of discussions in the press which has raised some interesting points, such as the benefits of not letting your child give up too easily. However, I don't think I'm going to revert to this Chinese style of parenting any time soon.

A different angle on parenting issues was raised in a recent survey by the UK website Netmums. Apparently many mothers are under so much pressure to appear like perfect parents that they are less than honest with other mothers about how much television their children watch or what they cook their families. I daren't imagine what Chua would say to them, but I see the predicament! That common dilemma of should you play an educational game with your kids or let them watch TV while you check your email.

Judging by a Canadian literacy group, we really should opt for the educational games. Apparently spending as little as 15 minutes a day playing games such as Uno or Scrabble could help vastly improve literacy skills, not just of children but of their parents too. In a recent survey in Canada 50 percent of Canadians admit a lack of confidence in helping their children with their homework. This lack of confidence was attributed to a staggering deficiency of literacy skills among parents themselves, which in turn leads to impediments in literacy development among the children of these parents.