You can have great fun with your child playing phonics games, which are all about playing with the sounds in words.

What’s more, many of these games can be played on the move so are ideal for playing in the car or while waiting to be served in a restaurant.

The different skills which these phonics games will help to develop are:

Before starting these phonics games your child should be comfortable with letter recognition. If he needs some practice on learning letters try these other early literacy activities for learning letters first.

Your child is also sure to enjoy these word-based literacy games which are designed to develop word recognition.

Ready to have some fun... 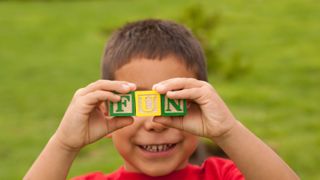 The following phonics game will teach your child to break down longer words into parts which will eventually help when reading and spelling long words.

These phonics games help your child learn to recognise and generate rhyming words.

With these phonics games your child learns to isolate the first or last sound from the rest of the word.

These phonics games help your child to learn to blend individual sounds to make a word.

By playing these phonics games your child is practicing breaking down words into their individual sounds.