Probably one of my favourite times of the day is cuddling up with my 5 and 7-year-old boys at bedtime and reading them the latest instalment of our current read aloud book. Reading aloud to my children is something that I have done from almost the day they were born and I intend to keep doing it for as long as I can persuade them to let me! 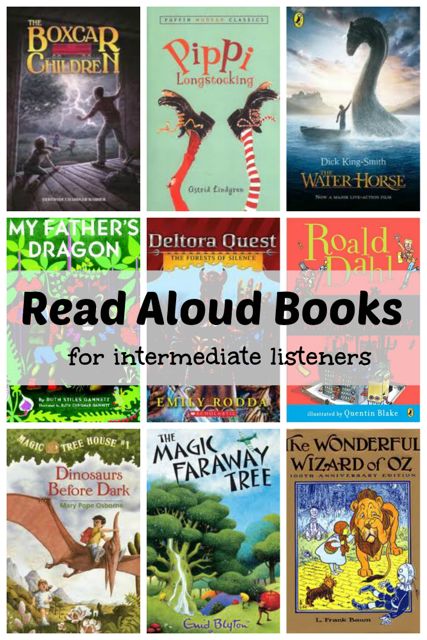 As well as being something which we all enjoy, there are many other reasons to read aloud books to your child, such as improved vocabulary, better listening and comprehension skills, and improved reading fluency.

As my sons have grown older we have started to tackle longer read aloud books, such as chapter books and short novels, as well as longer picture books. I have taken care to choose read aloud books which will keep all three of us engaged. For I must say, whereas when they were younger I would have read them virtually any age-appropriate children's book they chose, now that the books can take days or even weeks to read, I have become more discerning in what I will and will not read. If my eldest boy wants to read "Diary of a Wimpy Kid" - he can read it himself!

I have sometimes found it a challenge, however, to find appropriate read aloud books, particularly given the two year age gap between my sons. Illustrations are a big bonus for my youngest, helping to keep his interest during the longer passages. With a view to expanding my children's vocabulary, I have a preference for books with interesting and varied vocabulary, but if it is too complex, my youngest interrupts all the time to ask what words mean. This then frustrates my eldest as we lose the flow of the story.

Below you can find a list of read aloud books which I have found to be ideal for this age range, having passed the test of managing to keep both of my sons engaged at the same time. Some books, particularly those with frequent illustrations, such as My Father's Dragon, Fantastic Mr. Fox or The Wonderful Wizard of Oz, were enjoyed by my sons when they were 4 years old. Many of the books would, of course, be enjoyed by older children also.

Even though my children love listening to novels, we haven't forgotten about picture books. There are some wonderful picture books available with longer texts for older children and this format is perfect for introducing your child to more complex subjects or non-fiction texts. We still alternate regularly between picture books and chapter books.

If you are not sure if a read aloud book is of an appropriate level to read to your child, you can try checking with the Scholastic Book Wizard. Select 'All Books' and enter the name of the book. You will then find the following details about the book:

You can also use the Scholastic Book Wizard to hunt for other books of a similar level to a book you identify - great for trying to work out what to read aloud next.

Here is the list of our favourite read aloud books!

by Roald Dahl tells the story of a little girl, Sophie, who befriends a Big Friendly Giant. Together they hatch a plan to enlist the Queen's help and stop the other monstrous bone-crunching giants from guzzling up little girls and boys.

is a series of books by Gertrude Chandler Warner which was published in 1942. It tells the story of four resourceful orphans who are determined to stay together and have lots of adventures including turning an abandoned boxcar into their home.

Charlie and the Chocolate Factory

by Roald Dahl follows the fortunes and upsets of five lucky children who win Golden tickets to tour Willy Wonka's famous chocolate factory. Roald Dahl writes wonderful read aloud books which are all among our favourites.

by E. B. White was originally published in 1952 and still remains as popular as ever. Determined to save her friend, Wilbur the pig, from slaughter, Charlotte the spider spins a web that reads "Some Pig" and convinces the farmer that Wilbur is a special pig that should be saved.

The Chronicles of Narnia

series by C. S. Lewis is another classic collection of books which has been around for years and tells of the magical kingdom of Narnia. The first in the series is "The Magician's Nephew" and this is followed by the most famous book in the series "The Lion, the Witch and the Wardrobe". These are some of our favourite read aloud books.

series by Emily Rhoda. This gripping fantasy series of eight books captivated my children and me. It follows the adventures of three unlikely heroes to the most dangerous corners of the kingdom of Deltora in order to recover seven gems with mysterious powers and save the kingdom from the evil Shadow Lord. The first book in the series is "The Forests of Silence".

by Roald Dahl. We have this as an audiobook and must have listened to it at least twenty times. My children love it and it is one story that I never get bored of hearing! Find out how the cunning Mr Fox devises a fantastic plan to outwit three mean farmers.

series by Enid Blyton. In the first of this series, "The Magic Faraway Tree", three children move to a new house and are delighted to discover the Faraway Tree in the Enchanted Woods at the bottom of their garden. Follow their magical adventures in the lands which come to rest at the top of the Faraway Tree.

James and the Giant Peach

by Roald Dahl. I generally find you can't go wrong with Roald Dahl and this is no exception. Although it starts off on a dark note - newly orphaned 4-year-old James is sent to live with his horrible aunts - the fun soon begins as a giant peach starts growing on an old peach tree, breaks off and rolls away.

series by Barbara Park is a series of funny books about a kindergartener Junie B. Jones. The first book of the series is "Junie B. Jones and the Stupid Smelly Bus" in which Junie is so scared of the school bus that, at the end of her first day in kindergarten, she decides not to go home.

series by Laura Ingalls Wilder. The first book of this series, "Little House in the Big Woods", begins the story of the author's own childhood in which her pioneering family head west in a covered wagon for Kansas.

series by Mary Pope Osborne is a popular time-travel series with short chapters in which a brother and sister discover a treehouse which magically transports them to different time periods which they see depicted in books. As well as absorbing story lines, each book also introduces interesting facts about particular places, events or phenomenon.

by Roald Dahl. Matilda is an extraordinarily bright little girl but her parents just think she's a nuisance. She gets her own back by playing practical jokes on them, but the real test comes when she tries to help her lovely teacher, Miss Honey, by pitching herself against the diabolical head teacher, Mrs Trunchbull.

The Mouse and the Motorcycle

by Beverly Cleary is the first of three books which follow the escapades of Ralph the mouse and his red motorcycle.

by Richard and Florence Atwater tells the comical story of a house painter and his troop of twelve penguins. My children loved it, but I did find it a little silly. It is also worth mentioning that the film deviates wildly from the book.

series by Ruth S. Gannett is a series of three short fantasy novels written in 1948 in which a young boy, Elmer, uses his sharp wits to rescue a captive dragon and return him safely to his family. This is a great introduction to chapter books, with short chapters and numerous pictures to keep little ones captivated, and was one of our first longer read aloud books.

by Norton Juster is a fantasy story about a bored 10-year-old boy who comes home from school to find a large tollbooth in his room. Driving through the tollbooth gates on his toy car, his amazing adventures begin.

by Astrid Lindgren is about a 9-year-old girl who lives alone with a horse and a monkey and no parents telling her what to do. Many adventures ensue in which Pippi manages to outwit any adult that gets in her way.

by Beverly Cleary is one of the early books in the Ramona series and follows the mischievous but amusing exploits of 5-year-old Ramona during her first days in kindergarten.

by Kenneth Grahame is a charming story about a boy and a dragon, only the dragon is not of the usual mold - this one wants nothing to do with violence. My sons and I originally listened to this as an audiobook and I was as transfixed as they were.

by John Gardiner is about a 10-year-old boy, Willy, who tries to save his grandfather's farm by winning a local dogsled race with his dog, Searchlight. Be warned for sensitive children, however - there is a sad ending.

by E. B. White tells of the adventures of Stuart, a two-inch high boy born to normal sized parents, who looks exactly like a mouse. When his best friend, Margalo the bird, disappears, Stuart ventures from home for the first time and has his greatest adventure.

by Dick King-Smith. An 8-year-old Scottish girl and her 5-year-old brother find a mysterious egg washed up on the Scottish coast after a storm. So begins their adventure with what is to become the Loch Ness monster. After you have read the book you can now watch the film.

The Wonderful Wizard of Oz

by L. Frank Baum. Having seen this film countless times as a child, I thought I was going to be bored to death reading the book. I couldn't have been more wrong. Both I and the kids loved it. It is worth getting a version containing the original illustrations by W. W. Denslow.


For more ideas of great read aloud books for boys and girls, I can also recommend looking at the following lists: