My son has had a bit of an obsession with all things to do with posting for a while now. Since he has also recently started learning to read I thought it would be fun to reinforce what he is learning using a posting-related reading game.

In this game your child reads a word on a card and then posts it into the postbox with the correct image on the front. I used old tissue paper boxes for my eight different postboxes, of which I have plenty given the endless runny noses in our house at the moment! I placed the postboxes randomly around the room so this game involved lots of running to and fro between postboxes, which my son loved. 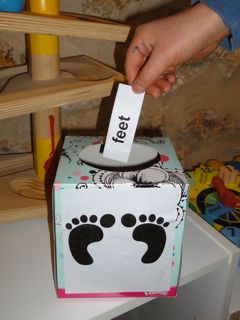 You can obviously play this game with any words that you choose, but I decided to concentrate on words with two consecutive vowels in them, which are known as vowel digraphs. Vowel digraphs are combinations of vowels which combine to make a single vowel sound. In many cases the first vowel is long while the second vowel remains silent, such as OA in boat or AI in snail. However, this is not always the case (think of OI in boil or OO in moon).

I chose eight words where the first vowel sound is long and the second is silent - boat, coat, feet, tree, snail, train, tie and pie. If you want to use the same pictures and words as me, you can download this PDF document containing them. Click to view the PDF in your browser, or right-click to download it.

Here are the details of what I did:

Gather your materials. Decide which eight words you are going to use and find a picture to represent each word. You could draw the pictures, cut them from magazines, do an image search on google or, if you want to use the same words as me, download the PDF file of the pictures from the link above. You will also need eight empty tissue paper boxes, paper or card to write the words on, scissors, a pen and glue. 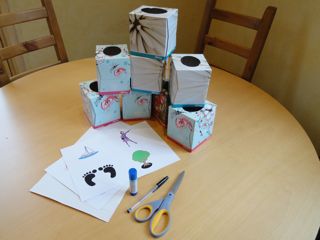 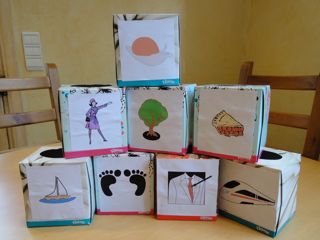 Print or write out each of the eight words four times on paper or card. This will give you 32 cards altogether. If you are using the same words as me, a copy of these words is included in the PDF document which you can download above. To make more durable word cards, I decided to glue the piece of paper containing the words onto a piece of card first, and then cut out the individual words. Make sure that the word cards are small enough to fit into the top of the tissue paper box, although still big enough to be easily read by your child. 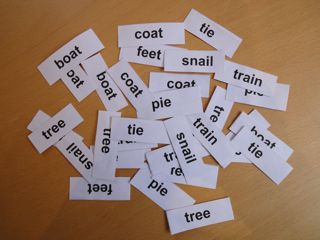 Shuffle the cards up and place them upside down at one end of your room. Place the tissue paper boxes randomly around the room. Ask your child to choose one card at a time and 'post' it in the correct 'postbox'. Depending on the competitive nature of your child you could get him to do this against the clock, and see how many he can post in, say, a minute. My child preferred to take his time over it so I let him work through all of the cards in his own time. I also involved my younger pre-reader by asking him to post word cards which his brother had read for him. Both boys loved it! 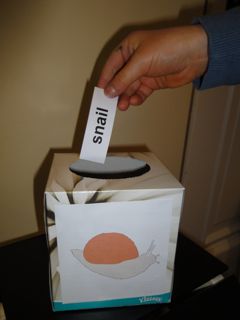 When the time is up, or all the cards have been posted, empty each of the postboxes and count how many cards were posted in the correct box. Next time you play you can ask your child to try and better this number.

Of course, you can play many variations of this game. For younger children you could make picture cards instead of word cards, all depicting objects which start with one of eight letters. Label the postboxes with the eight letters and ask your child to put each picture card in the box which shows the first letter of the object shown on the card.

Or you could ask older children to post the word card into the postbox which shows a picture of something which rhymes with the word on the card.

Here are some other ideas for word-based literacy games you can play with your child. Many of them can be played with the same word cards which you have just created.


You are here: Home › Word Games › The Read and Post Game